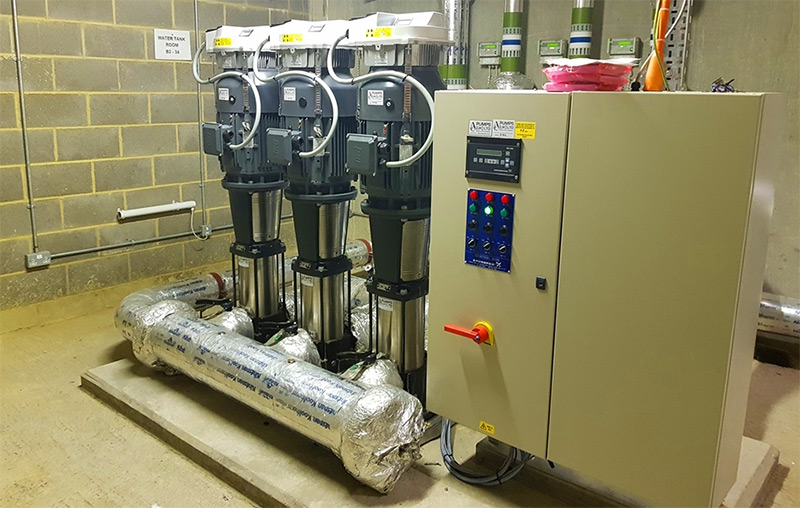 We were contacted by one of our customers as their current cold-water booster set had a failed motor and inverter. The problem was the controls on the set were obsolete and the replacements will not communicate with the other controllers. We came to the conclusion that even though the controllers had obsolete programming the motors had a standard frame and shaft size, therefore replacing all three motors and retro fitting Hydrovar inverters would be the most cost effective solution to getting the set back up to full strength.

We planned works over three days, the first day we removed one of the existing motors and installed a replacement. We mounted a new Hydrovar and temporarily set the inverter to run while we carried out the works on the other two pumps, this meant no down time in the water services.

Part of our recommendation was to replace the existing expansion vessel as the vessel that was currently fitted was only 8 ltr and had a history of failing.

We checked the performance curve and found that by adjusting the set point we were able to run the new motors at a lower frequency but still achieve the same duty and performance values on the pump. This, in turn, meant the set was running more efficiently.

Once all three motors and inverters had been installed we carried out a few minor electrical modifications in the panel so each inverter would communicate with the other. We fully commissioned and left set in full service.

If you require assistance on a cold water booster set please contact our services or sales team on 01322 292415 or email sales@pumpsukltd.co.uk